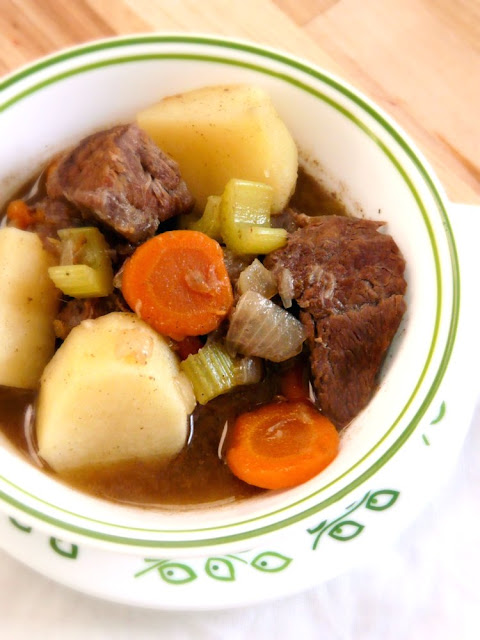 Beef stew is somewhat new to our dinner table. I never used to cook it "BMVG" (Before Mr. VG) because we used to eat Asian food much more frequently. But since he came along and is the epitome of a meat and potatoes guy, beef stew had to make its appearance somehow. Over the years, I've tried several beef stew recipes ranging from extremely easy to not-so-easy.
The extremely easy version took no more effort than chucking beef stew meat, vegetables and a can of Campbell's cream of mushroom soup into a crock pot and calling it a day. The not-so-easy version was making Tyler Florence's Ultimate Beef Stew. It took alot more effort but it was out of this world. This time, I wanted to try yet a different version and settled on Paula Deen's recipe mostly because it didn't call for red wine as incidentally, I didn't have any.
The result was a hearty beef stew and while it was really good, I felt it still didn't compare in taste to Tyler's recipe which had a richer and deeper, bolder flavor due to the red wine. The kids and Mr. VG, however, preferred Paula's version more for the same reason so in the end, it all just boils down to personal taste.
Paula Deen's Old-Time Beef Stew
Makes 6 servings; recipe adapted from the Food Network.
Ingredients
2 pounds stew beef
2 tablespoons vegetable oil
2 cups water
1 tablespoon Worcestershire sauce
3 cloves of garlic, peeled
1 or 2 bay leaves
1 medium onion, sliced
1 teaspoon salt
1 teaspoon sugar
1/2 teaspoon pepper
1/2 teaspoon paprika
Dash ground allspice or ground cloves
3 large carrots, sliced
3 ribs celery, chopped
3 medium potatoes, cut into large chunks
2 tablespoons cornstarch
Directions
Brown the meat in hot oil in a single layer. Make sure not to overcrowd the pan. Add water, Worcestershire sauce, garlic, bay leaves, onion, salt, sugar, pepper, paprika, and allspice. Cover and simmer on very low heat for 1-1/2 to 2 hours or until the meat is soft. Remove bay leaves and garlic cloves then add carrots, celery and potatoes. Cover and cook 30 to 40 minutes longer.

To thicken the gravy, remove 2 cups hot liquid. Using a separate bowl, combine 1/4 cup water and cornstarch until smooth. Mix with a little hot liquid and return mixture to pot. Stir and cook until bubbly. 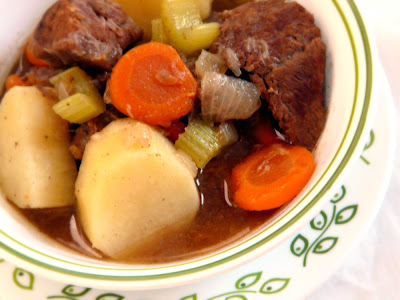