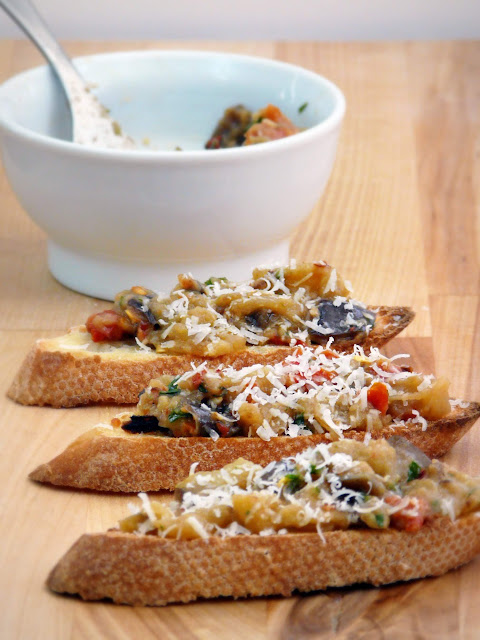 When my brother was visiting a couple of weeks ago, we had gone to a street fair/farmer's market not too far from where I live. I snapped tons of photos with the intent to share them in this post but sadly I lost most of them except for a handful. I'm still not sure how I lost them but one minute they were here and the next minute, they had all disappeared. What a bummer!

Anyway, the fair/farmer's market had -- and this is a very rough guess -- probably about a hundred vendors. Half of the vendors were artisans selling their unique handmade goods and the other half were selling food products and farm fresh produce. There were lots of specialty foods like handmade breads, cakes, cookies, pastries, beef jerky, caramel corn, kettle corn, caramel apples, infused oils, flavored honey, hummus, dips and lots more I can't seem to remember at the moment. The produce stands offered really fresh fruits and vegetables ranging from plump tomatoes to luscious strawberries.

Best of all, each food stall was handing out samples left and right. Good sales technique on their part, I must say. Because of that, we ended up buying a whole bunch of goodies ike mini cakes, spicy beef jerky, kettle corn and eggplant dip!

The thing about the eggplant dip was that initially, the stall itself didn't interest me. All the dips looked good but I just wasn't in the mood for dip so I passed on tasting any, that is, until one of the fellas mentioned an eggplant dip. That stopped me dead in my tracks because the word Eggplant is essentially all that's needed to get me to taste something. It's that much of a weakness for me. One bite of it had me buying about a half pint of the stuff (roughly one cup) and it sure cost me a pretty penny (about 500 of them to be exact). When I got home, I discovered that, to my dismay, half of it was mostly oil. Don't get me wrong. I did enjoy the dip. It was garlicky, had a little spicy kick to it and tasted great but it was sitting in too much oil and I knew I could make myself a batch that would be equally tasty and less oily.

So I scoured the internet for a recipe that was similar and finally found one that appeared to have the same ingredients. In the end, I think this version trumps the other because there is so much less oil in it. Plus, the flavor of the eggplant is much more pronounced and nicely enhanced by the fresh herbs and sundried tomatoes. Needless to say, I won't be going back to that dipping stall. Ok, maybe I will be, if just for a little itty bitty taste of my beloved eggplant. ~ Veggie Girl 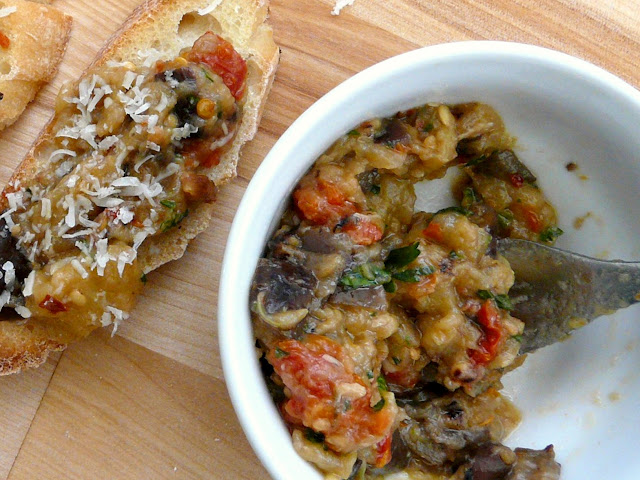 Method:
Preheat oven to 400°F with rack in middle. Cut off and discard top of garlic head to expose cloves. Place the garlic onto a piece of foil and drizzle about 1/2 tablespoon of olive oil over it. Wrap it up and roast until tender, about 45 minutes. Once cool, squeeze the garlic gloves out of their skins and set aside. 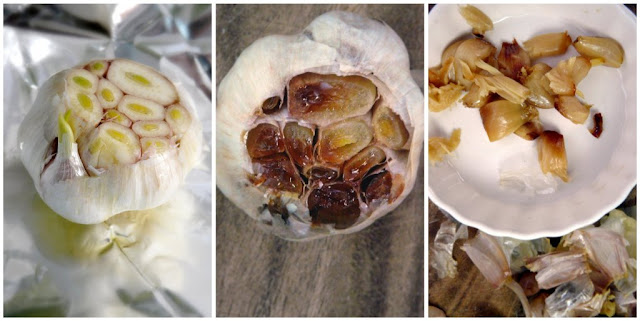 Meanwhile, cut the eggplant into 1/2-inch chunks and toss with a generous amount of salt. This is to expel the water from the eggplant. After about 30 minutes, rinse the eggplant in water, drain in a colander and squeeze them in a kitchen towel to remove the liquid. Or, if you have a salad spinner like I do, place the eggplant in it and give it a few spins to remove excess water. Much easier this way.

Next, heat 2 tablespoons olive oil in a large skillet over medium-high heat then sauté one third of the eggplant until browned and tender, about 6 to 8 minutes. If you find that the eggplant is getting browned too quickly and not getting soft enough, put a lid on the pan to allow it to steam a little. Cook remaining eggplant in the same manner and in two separate batches then transfer to a bowl.

Combine 1 cup cooked eggplant with the roasted garlic by mashing coarsely together with a fork. Stir this into the remaining eggplant and add sun-dried tomatoes (without tomato oil), parsley, basil, lemon juice, and 3/4 teaspoon of pepper. Season with salt and drizzle with tomato oil. Serve the dip on toasted baguette slices or over pasta.