I Dream of Red Velvet & How to Line a Round Pan 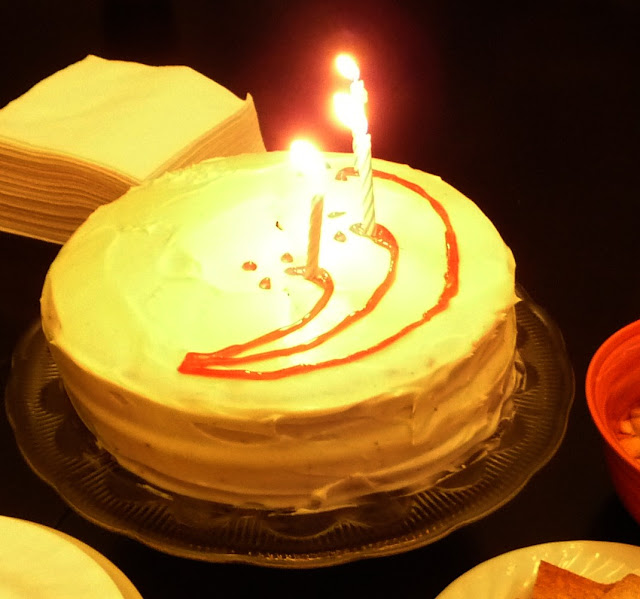 Last Saturday, a friend of Veggie Girl and I hosted a casual get together among just us friends, which is really just a small group, and at the same time to celebrate the birthdays of Veggie Girl, Mr. R & Miss D, all within a few days from each other. Our friend Mrs. L prepared a Korean bbq feast for us, and may I say Hibachi Style, where you cook your own meat at the table, just like how they do it at a Korean restaurant.  What a delicious meal, indeed!

I volunteered to bring a Red Velvet Cake for the occasion.  By bring I mean I made it from scratch.  As you know I am not a baker, but I like to try anyway.  Judging by the reaction from the group last Saturday, I believe they were pleased with the results.  I have made Red Velvet for them before so they have seen and tasted my successes and mishaps in making this cake.  I know these friends will not lie to me.  They will tell me honestly if something is wrong with my cooking, and I appreciate that because it only makes me a better cook.
If I may give you an insight as to what role Veggie Girl plays in my life, she is the pusher, the poker, and the nudger. She has always prodded me to sell my baked goods on Etsy.com.  Meanwile, me, the reluctant baker have yet to succumb to Veggie Girl’s proddings.  And I think I am beginning to succumb to her,  I decided to "take the stance of the Colonel and his secret spices" and will instead just share how I came to know this delicious cake.
My first encounter with Red Velvet was through those cake-by-the-slice items in the deli of the supermarket.   My curiosity was heightened when I saw Oprah and Gayle raving about this cake on TV and on the radio respectively.  So I said what is the big deal about Red Velvet?  I then decided to try different cakes from different delis and I don’t get what the big deal is.  One day I thought I’d do an experiment where I will close my eyes and I will try to describe this cake by pure taste buds alone.  And so I did, but nothing was really standing out except that it’s a sweet cake….so what’s the big deal?  I even had my niece, who is a baker, make one for me.  Still, no big deal.  Until one day, during a casual conversation with a friend, she revealed an ingredient that I never tasted in those deli cakes.  Again I got curious so I started researching and comparing recipes until I finally created one all my own.
As a trade off, in place of the recipe,  I will however share with you a quick way to line a round pan with wax paper.
Quick and Easy Way to Line a Round Pan