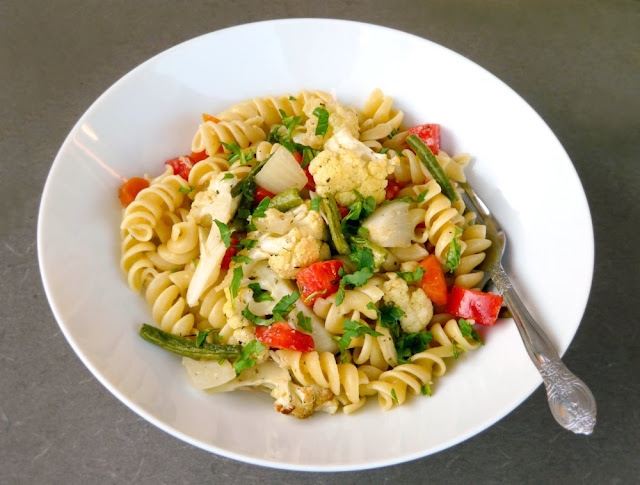 I've only had Pasta Primavera once in my lifetime and since then, have never ordered it again as vegetables drenched in a heavy cream-based sauce is just not my cup of tea. But then, I chanced upon Giada de Laurentiis' Pasta Primavera recipe and her version sounded so tempting, I just had to try it. There's no cream in her recipe but what it does have are seasoned, oven-roasted veggies tossed with pasta and finished off with grated Parmesan cheese.

I adapted her recipe to suit my family's taste because not everyone in the family likes some of the vegetables that were called for. Instead, I used green beans, carrots and cauliflower. Definitely use vegetables that you love or enjoy because their flavors will really shine through in this dish. This made for another quick weeknight dinner but above all, it was light, satisfying and healthy.
LIGHTER PASTA PRIMAVERA
Adapted from Giada de Laurentiis, serves 4 to 6.
Ingredients:
2 carrots, peeled and cut into slices
1/2 lb. of green beans, trimmed and cut into 1-1/2 inch pieces
1/2 of a cauliflower, chopped into bite size pieces
1 onion, roughly chopped
1/4 cup olive oil
Salt and freshly ground black pepper
1 tablespoon dried Italian herbs
1 pound fusili
1 large vine ripened tomato, chopped, or 15 cherry tomatoes, halved
1/2 cup grated Parmesan
Handful of arugula, chopped, to garnish
Method:
Preheat the oven to 450 degrees F.
In a large bowl, toss all of the vegetables with the oil, salt, pepper, and dried herbs to coat. Transfer them to a large baking sheet and arrange evenly over the baking sheets. Bake until the vegetables are tender and begin to brown, stirring after the first 10 minutes, about 20 minutes total.
Meanwhile, cook the pasta in a large pot of boiling salted water until al dente, tender but still firm to the bite, about 8 minutes. Drain, reserving 1 cup of the cooking liquid.
Toss the pasta with the vegetable mixture in a large bowl to combine. Add the chopped tomatoes or cherry tomatoes and enough reserved cooking liquid to moisten. Season the pasta with salt and pepper, to taste. Sprinkle with the Parmesan cheese and chopped arugula and serve immediately.
Posted by Administrator