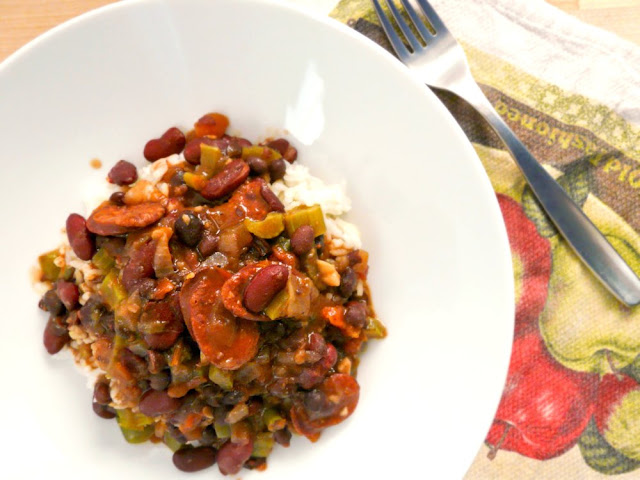 We had this stew for dinner yesterday and while it wasn't exactly suitable for yet another sweltering, 100-degree day in the valley, I can't really complain because it was made in the crock pot and required minimal kitchen time on my part.
Another huge reason as to why I made this dish was because one day last week, I opened up my pantry and suddenly noticed that I had a gazillion cans of beans piled up in a corner. There were black beans, kidney beans, garbanzo beans, Cannellini beans, black-eyed peas...well, you get the picture. How I amassed that many varieties of canned beans, I'm not exactly sure but if I had to guess, I bet I saw them on sale at one point or other and thought up a grand plan to cook them up in a stew or soup but of course, never got around to it. Until now.
Since I love Southern food, I decided to make a Creole stew with some of the beans in my cupboard. Creole food is very similar to Cajun food but is distinctive due to having more Spanish & Portuguese influences while Cajun food derived its cooking style from the French. You'll see beans and tomatoes being widely used in Creole food and rice is usually a very important component of a meal...perfect for a rice addict like me! Even though I made this dish in the slow cooker, you can also simmer it on the stove top on low heat for a couple of hours, stirring it every so often until the vegetables are soft and tender. Best served with rice but could also be accompanied nicely by some good bread or cornbread.

Add the bay leaves and spice seasoning to the crock pot then give everything a good stir to mix it all up. Cover and set the slow cooker on low. Cook for 6 hours. Don't worry if it may seem like there's not enough liquid in the pot. Over the span of 6 hours, the vegetables will render alot of liquid when they soften.
Add salt to taste before serving. Allowing it to cool for about 15 minutes will yield a thicker stew. If you end up having too much liquid, you can thicken it with 2 tablespoons of cornstarch mixed with 1 tablespoon of water.
Posted by Administrator