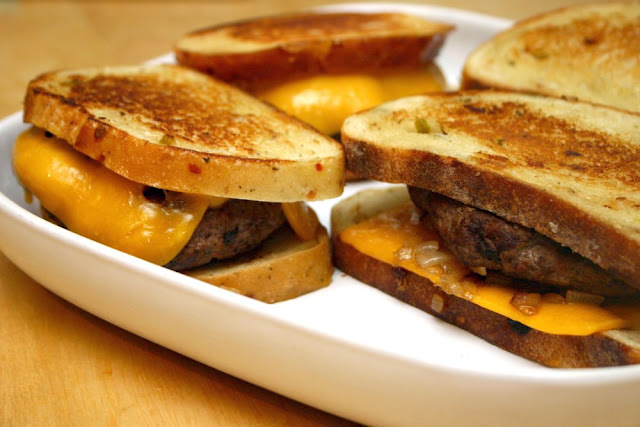 With my parents on their weeklong Mexican cruise, we're back to being on our own for dinner again. When asked what they wanted for dinner, the kids said they wanted something "non-Asian" since, as my son put it, "when Grandma gets back, we'll be eating lots of Chinese food again." He felt that we had better get our fill of American food because once my parents get back from their cruise, it'll be Chinese food for another two weeks straight until their departure. He had a point, so I obliged.
I happened to have a couple pounds of thawed lean ground beef so my son suggested that we have hamburgers for dinner but since we didn't have any hamburger buns, I decided to make Patty Melts instead.
If you're not sure what a Patty Melt is, it's basically the fat, artery-clogging sibling of the typical hamburger. It's basically a hamburger patty placed on buttered sourdough or rye bread and stacked with grilled onions and sliced cheddar cheese then pan fried on both sides until golden brown. No, it's not good for you and yes, it tastes really good. Don't make this if you're on a diet or are trying to lose weight. Do make this if you've just won the lottery or just received a promotion and want to reward yourself with some feel-good food. It has no fresh veggies in it so you might as well not even bother putting any on your plate in the form of a salad just so you can feel better about having eaten something healthy along with the Patty Melt. It is what it is. No need to even try. Just go ahead and pile some fries on your plate alongside the Patty Melt. That's a good duo right there.
You want to eat healthy? There's always later. Or tomorrow.
THE PATTY MELT
Makes 4.
Ingredients:
1 lb. of lean ground beef
1 medium onion, diced
4 slices cheddar cheese (or other cheese of choice such as Swiss or Pepper Jack)
8 slices sourdough or rye bread
Salt and pepper
Butter, softened
Method:
Posted by Administrator