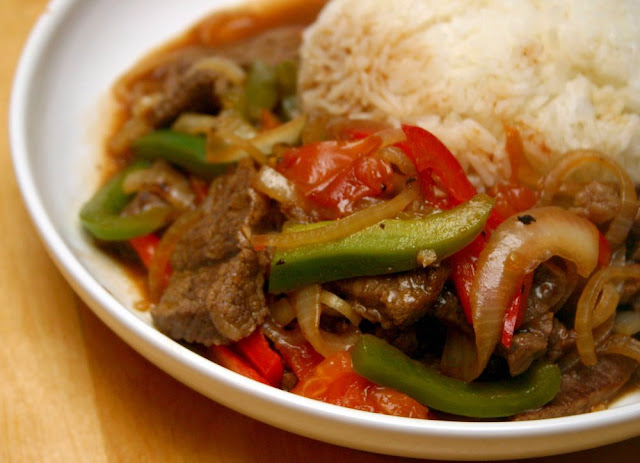 It's colorful bell pepper season! I love bell peppers of all colors and especially love that red and yellow peppers are so cheap and affordable right now so I've been buying them left and right and cooking them in all kinds of stir fry's. Tonight, I made pepper steak for dinner. It's a quick and easy stir fry that is great for a weeknight meal.
The key to tender, flavorful beef in this dish is to marinade the beef slices/strips in cornstarch and soy sauce. Mixing some cornstarch with the meat before stir frying is a popular Chinese technique, one which my grandmother also adopted. I'm guessing that the cornstarch works as a binder and seals in the meat's juices as well as allowing the marinade to adhere to the meat better. Whatever its purpose is, it works.
PEPPER STEAK
Serves 4.
Ingredients:
1 lb. beef sirloin/tri-tip/chuck steak or cut of choice, sliced thinly against the bias
1 red/yellow/orange bell pepper, sliced into strips
1 green bell pepper, sliced into strips
2 ripened tomatoes, cut into large chunks
1/2 of a large onion, sliced
3 cloves of garlic, minced
1/2 cup soy sauce, divided
1/2 cup water
1 tbsp. cornstarch
2 tbsp. Worcestershire sauce
2 tbsp. vegetable oil
Pinch of sugar
Method:
1. Mix the beef with the cornstarch and 1/4 cup soy sauce. Set aside and allow to marinade for about 15 minutes. 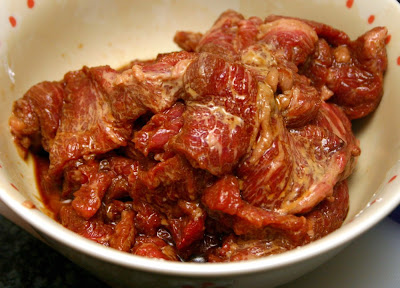 2. Prep the vegetables while the meat is marinating. 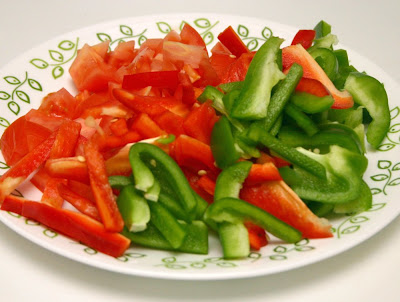 3. Heat the oil in a wok over medium heat. Add the garlic to the wok and saute until fragrant.
4. Add the onions and continue to saute until they begin to soften. Add the beef and cook over high heat for a minute until browned.
5. Next, add the sliced peppers, tomatoes, Worcestershire sauce, remaining soy sauce, pinch of sugar and water. When the sauce begins to simmer, reduce heat to medium-low and cover the wok with a lid.
6. Cook for about 5 minutes or until the peppers have become crisp tender and the beef is just barely cooked through and no longer pink.
7. Transfer to a dish and serve over rice.
Posted by Administrator