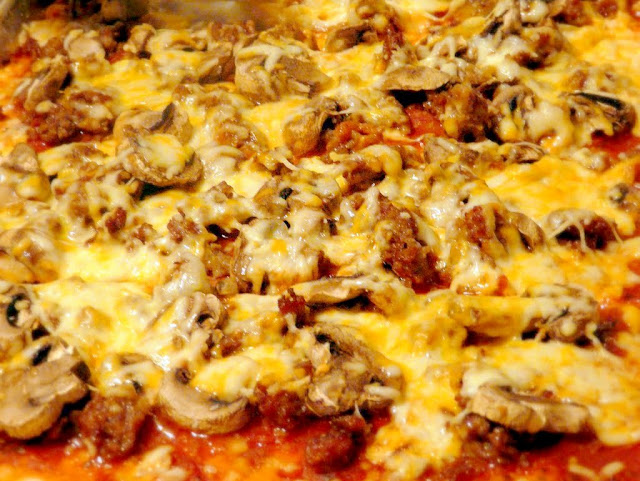 Mr. VG's parents came to visit us sometime last November and, being from Wisconsin, are huuuuuge Green Bay Packers fans. Of course, we now know that it isn't in the Packers' cards to win the 2012 Super Bowl but during their unstoppable regular season, GBP fans were treated to many a great football game. It's no wonder that every time a GBP game day rolled around, Mr. VG and his parents would deck out in their Packers shirts, jerseys, hats and necklaces (made of plastic cheese and football pieces) and go into full game mode with big plates of game time grub. Loud cheers and shouting at the TV would ensue for a good three hours. Not being a fan of football myself, it was kind of fun and amusing for me to sit back and observe while I munched on the food.
Mr.VG's mom made a totally tasty sausage and pepperoni pizza from pre-packaged ingredients. Hey when you've got an early game, you want to put the grub on the table and be in front of the TV by kickoff so shortcuts really come in handy. I was surprised at how quickly the pizza came together and even more surprised at how good it tasted. All it took were six ingredients and less than an hour.
PRONTO PIZZA
Makes two large pizzas.
Crust Ingredients:
2  (6.5 oz) packages Betty Crocker Pizza Crust mix
2 (14 oz.) jars of pizza sauce (we used Ragu)
Toppings:
You can go nuts here but we used...
1 lb. Italian sausage (without casing)
1 (10 oz.) package pepperoni
Sliced mushrooms
Monterey Jack and Cheddar cheese, shredded
STACKED ROAST BEEF & SWISS SUB
Mr. VG's dad put this one together and it was so good! Another quick and easy game day recipe. 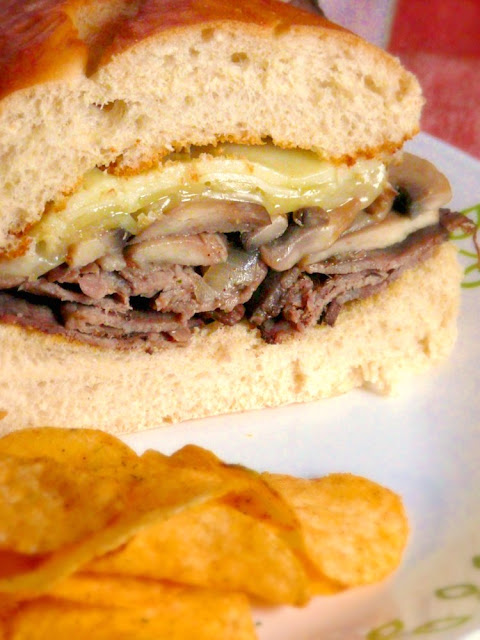 Ingredients:
2 large submarine loaves of bread, any variety
2 lbs. of deli roast beef, sliced thinly
2 lbs. sliced Swiss cheese
1 cup sliced mushrooms
1 cup sliced onions
1 tsp. garlic, finely minced
3 tbsp. mayonnaise
2 tbsp. butter or margarine
Salt & pepper
Method:
Melt the butter or margarine in a large skillet. Add the onions and mushrooms and saute until  the onions are caramelized and the mushrooms are tender. Salt and pepper to taste then transfer to a plate and set aside.
In the same skillet, reduce heat to low and place the roast beef slices on it to warm them. They do render some juices which will become the au jus for dipping later. Once the beef slices have all been warmed, transfer to a plate.
Slice the submarine loaves horizontally into two. Remove some of the inner bread (to make room for copious amounts of the beef, cheese and toppings) and place the slices of Swiss cheese on the top half. Pop both top and bottom slices of bread into the toaster/oven until the cheese has melted and the bread is warm and toasted.
Mix the minced garlic with the mayonnaise. Spread it onto the bottom half then top with the beef, mushrooms and onions. Form into a sandwich and serve immediately. Enjoy with the au jus.
HERE ARE OTHER GAME DAY GRUB IDEAS FROM OUR ARCHIVES: 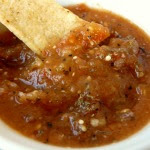 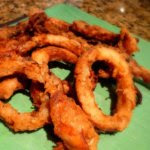 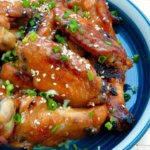 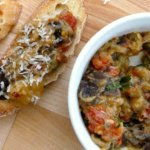 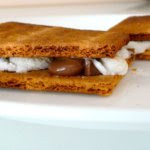 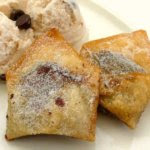 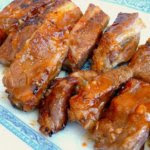 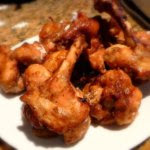 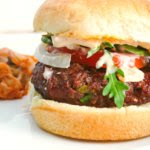 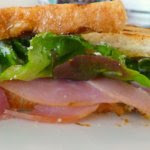 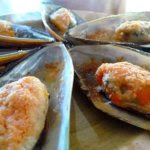 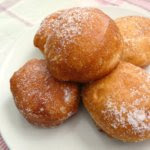 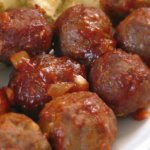 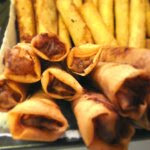 Enjoy your Superbowl Sunday and I hope your team wins!