As Gingham Girl mentioned in a previous post, one of our friends, E, hosted a wonderful Korean BBQ dinner at her home last week. I love Korean BBQ and it was so much fun to have had it in the comfort of her home with a bunch of our closest friends. Boy, did we pig out! I know I did. I brought fruit salsa with cinnamon chips for dessert but before we get to the recipe, I wanted to share some pics of our yummy Korean BBQ spread.
Fruit Salsa with Baked Cinnamon Chips
I've made this a few times now and I'll be honest, it can be time consuming to dice up so many fruits but it's totally worth it. It's a refreshing and light dessert that's perfect for hot summer days. I usually serve this with homemade baked cinnamon chips but you can also use store bought cinnamon chips or even graham crackers. 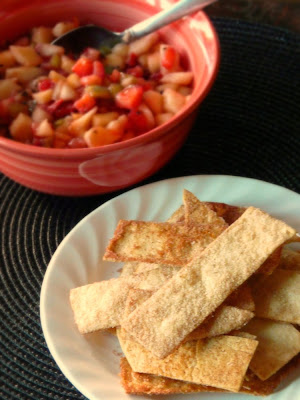 The beauty about this fruit salsa is that you can mix and match any combination of fruit that you like. I initially wanted to do a tropical fruit salsa but the mangoes at the store I went to looked too beat up to go into my salsa so I settled for just a typical fruit salsa with apples, strawberries, kiwis and pears.
Recipe yield: About two and a half pounds. It may seem like alot but if you're already taking the time to dice everything, might as well make a big batch of it. At least that's how I see it.  Trust me, it'll go quickly. You can spoon it over vanilla ice cream or add some to yogurt to create a parfait. I like it with cold milk and cereal too.
Fruit Salsa Ingredients:
1 pound of strawberries, hulled and diced
3 green pears, peeled, cored and diced
3 apples, peeled, cored and diced
3 kiwis, peeled and diced
3 tablespoons of honey
2 tablespoons of orange marmalade (you can also use a fruit preserve or jam that you like)
2 tablespoons of lemon juice
Cinnamon Chips Ingredients:
8 flour tortillas
1/4 cup of melted butter
1/2 cup of sugar
1/2 teaspoon of ground cinnamon
Method:
Preheat your oven to 350 degrees.
Add one tablespoon of lemon juice each to the diced apples and diced pears. The lemon juice is added to prevent browning of the fruit. Combine all the diced fruit in a large mixing bowl then add the marmalade and honey to it and stir together well. Set aside in the refrigerator to chill.
While the fruit salsa is chilling, prepare the tortilla chips.
Melt the butter in a microwave-safe bowl.  Place the tortillas on a chopping board or work surface in a pile. With a pastry brush, lightly coat both sides of the first tortilla with butter. Move it to a separate pile. Take the second tortilla and stack it on top of the first buttered tortilla then lightly butter the top side of it. The bottom of the second tortilla will absorb some of the butter from the first tortilla while it's resting on it. Continue doing this until all the tortillas have been lightly coated with butter. Cut the tortilla stack in half then into strips.
In a large plastic bag, combine the sugar with the ground cinnamon and shake to mix well. Add the buttered tortilla chips to the bag in portions, making sure not to overcrowd the bag. Shake the bag vigorously until the tortilla strips have been coated with the cinnamon sugar. You will need to use your hands to separate the pieces that are stuck together.
Lay the sugared tortilla strips in a single layer on a baking sheet lined with foil. Bake in the oven for 9 to 10 minutes until golden brown. Transfer them to a wire rack to cool. The chips will continue to harden while they're cooling off. Repeat until all the tortilla strips have been baked.
Serve with the chilled fruit salsa. Or enjoy them on their own. Either way, they're addictive.
Posted by Administrator