Sesame Wings + Gallivanting About in Chinatown 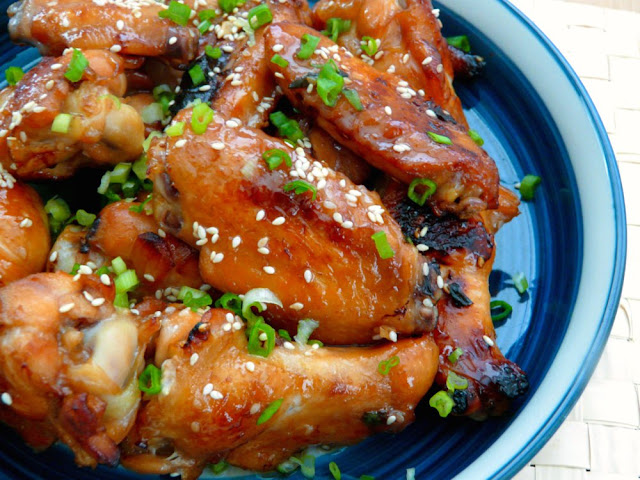 Sesame wings can be really addictive. How so? Well, my kids beg me to make it for dinner every time they peek into the freezer and notice the gigantic bag of frozen chicken wings staring back at them. Even though I made these wings for our 4th of July party and made them again the week after, the words "sesame chicken" came back to haunt me the following week. Mind you, it was a 10 lb. bag that I had bought so I suppose I was asking for it. I know, I KNOW. That's alot of wings. That means I'll probably be making these wings about once a week until they're all gone. Yikes. When I serve them for dinner, my daughter will sit there and polish off 15 wings on her own and won't even look at the other dishes. I don't blame her though. These wings do rock.
I made a batch again for dinner last night, after spending an afternoon gallivanting around in Chinatown with the kids, my niece, BiL and SiL. Instead of battling the nasty L.A. traffic, we took a leisurely ride on the train (Metro) into town.
I must admit that it's been a few years since I've ventured back to Chinatown but everything looks to be about the same. The Chinatown of today is mostly a tourist attraction, judging by the sheer number of souvenir/gift shops and Americanized Chinese restaurants that line Broadway. If you ask me, the real Chinatown (I'm talking heart and soul here) is actually a 20-minute drive due east where it's thriving nicely in a valley suburb called Monterey Park. You'll definitely get the Chinese hustle and bustle there along with the food and atmosphere but sans the tourists and Chinese dynasty architecture. Still, an occasional trip back to this Chinatown can be a fun thing to do.
SESAME WINGS
Serves 4.
Ingredients:
2-1/2 pounds of chicken wings or drumettes
3/4 cup of soy sauce
1 tbsp. of minced garlic
1 tsp. of grated ginger
1/2 cup of honey
1/4 cup of sesame oil
3/4 cup of water
2 tsp. of toasted sesame seeds, divided
1 scallion stalk, finely chopped
Method:
Combine the soy sauce, water, garlic, ginger, honey, sesame oil and 1 tsp. of toasted sesame seeds in a large mixing bow. Add the chicken wings or drumettes to it making sure they are submerged in the marinade then cover with plastic and refrigerate at least 3 hours or overnight.
Preheat oven to 400 degrees.
Place the marinated wings or drumettes (in a single layer) on a baking pan lined with foil. Bake for about 30 to 35 minutes, turning the wings over once to evenly roast both sides. Garnish with the remaining toasted sesame seeds and chopped scallions before serving.
Posted by Administrator