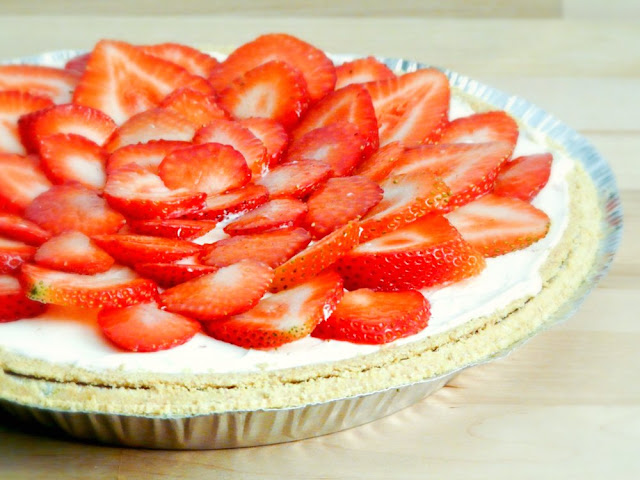 I've been having some hectic days of late especially since I'm juggling work and keeping the kids entertained / busy/ sedated (just kidding!) as much as possible over their summer break. When I get that busy, I have to rely on super quick and simple recipes such as this really easy no bake cheesecake. I've made this many times in the past but had then forgotten about it until Gingham Girl invited me over for cheesecake and coffee at her home last week. Since having a slice of her cheesecake, I've been craving more!
The biggest difference between the two versions is undoubtedly the texture. Hers has the fluffy, whipped texture typical of baked cheesecakes but the no-bake version has more of a thick, creamy texture, more reminiscent of pie. I don't even consider the no-bake version as cheesecake. It's more of a cheesepie but that just sounds kind of weird. Well, when the cheesecake craving hits me like a ton of bricks and I have roughly 15 minutes of prep time, you bet the no-bake version will do. I actually really enjoy this easy version and it totally hits the spot. The no-bake factor is indeed a plus as well, especially when the weather's been so warm.
You can make your own graham cracker crust but for even more ease, go with a store bought crust like I did. Top with sliced strawberries, peaches or even some Oreo cookie crumbs.
Super Easy No Bake Cheesecake
Adapted from Kraftfoods.com
Ingredients:
2 blocks of cream cheese, softened
2 cups of Cool Whip
1/3 cup of sugar
1/2 tsp. vanilla essence
1 store bought Graham cracker pie crust
1 cup of sliced strawberries
Posted by Administrator