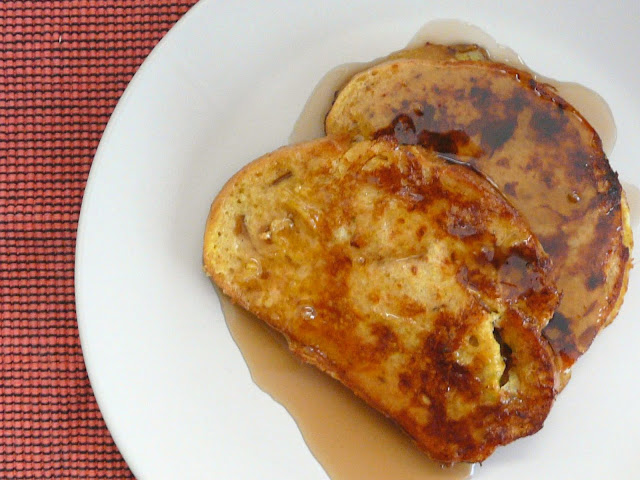 If you've read my homage post to Fresh and Easy's Green Chile Sourdough Loaf, you'll know that I stopped buying plain ole' white or wheat bread since we discovered this bread. One day, however, I woke up craving some french toast and of course, I didn't have regular bread so I decided to use the green chile sourdough bread instead.
I went into my experimentation not expecting it to taste all that great. I mean, green chili with maple syrup? That didn't even sound good at the time. But my craving persisted and I didn't feel like driving to the store for one loaf of white bread because I knew I would end up using just a few slices of it and the rest would end up moldy on my kitchen counter.
Well, let me tell you, this french toast came out fantastic. Who knew?! At first, I thought maybe my taste buds were seriously flawed somehow and others would find it revolting. But one day, Gingham Girl came by for breakfast and I presented this french toast to her and she thought it tasted great. Still not entirely convinced, I quietly made this for my kids on another morning and served it to them without telling them it was made from chile sourdough bread. They gobbled it right up and asked for seconds. That sold me! 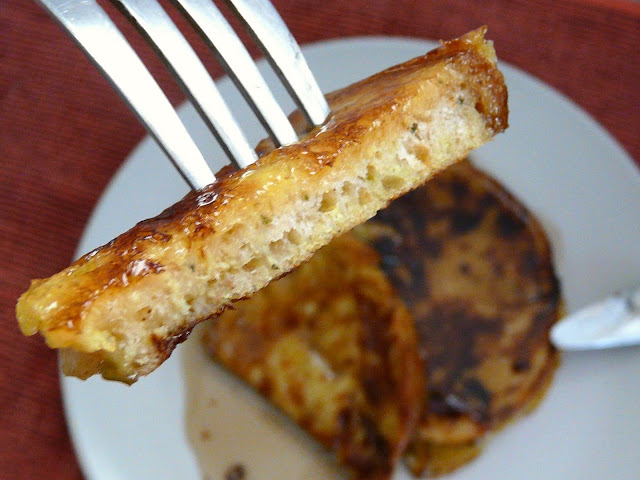 Take one bite of this french toast and you'll notice the wonderful depth and mix of flavors. You might think it would be an overpowering green chile flavor but it really is subtle. It's very well complimented by the flavors of the egg, vanilla, and maple syrup. You need to try this!
GREEN CHILE FRENCH TOAST
(Makes 4 larger slices or 6 small ones)
INGREDIENTS:
4 larger slices of Fresh & Easy Green Chile Sourdough bread (you can also use some of the smaller end pieces)
2 eggs
2/3 cup milk
1 tbsp. sugar
1 tsp. vanilla extract
1/4 tsp. ground cinnamon
Pinch of cayenne (Optional - for an extra kick)
Butter or margarine

METHOD:
1. Beat the eggs and whisk in the milk, sugar, vanilla extract, cinnamon and cayenne (optional).
2. Dip the bread slices into the mixture and let them soak up some of the egg-y goodness. This bread is pretty dense so soak it a tad longer than you would soak regular bread.
3. Next, heat a large pan or skillet and melt butter or margarine on medium heat. Fry the bread slices until golden brown on each side. Serve immediately. 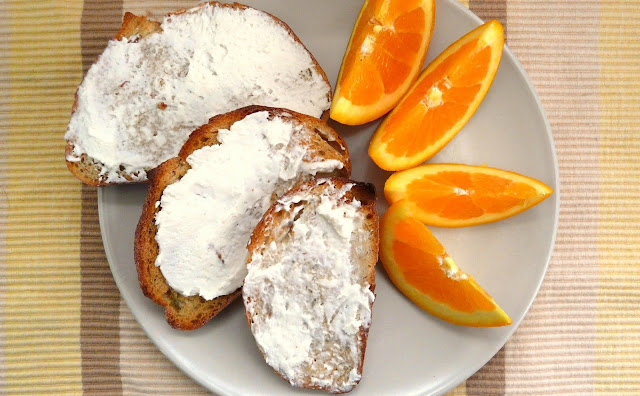 Another way we regularly consume this bread is to toast it, spread some whipped cream cheese on it and eat it for breakfast or snack. I've found that the flavors of the bread are much more intensified when toasted. The key is to toast it well enough so that it achieves a golden brown color and a hearty crouton-like crunch when you bite into it.
Because of the way the loaf is shaped, the smaller end pieces aren't big enough to make sandwiches with so that's how we came up with this idea to consume the rest of the loaf. My daughter especially loves to eat it like that. She snubs cream cheese on a toasted bagel but this she devours. 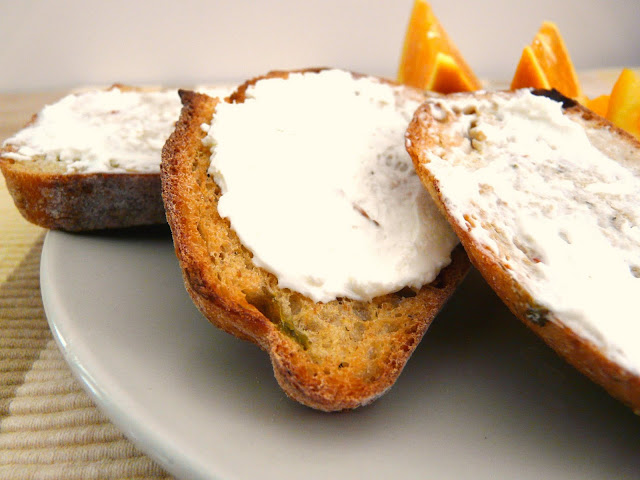 Although we normally eat it with just cream cheese, I'm sure it would taste great with a slice of tomato and onion or some smoked salmon or smoked ham. I might even try it with some sliced strawberries next time. Who knows, right? ~ Veggie Girl
Posted by Administrator