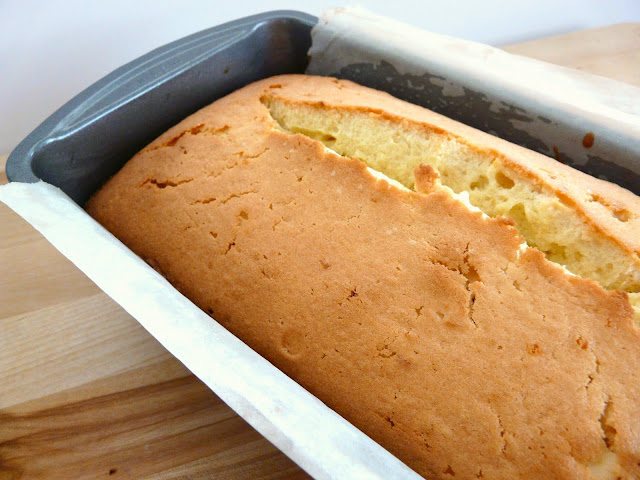 So I spent Easter weekend trying to master the art of cake baking. I would classify myself as a novice baker on the whole. I think I have cookies down, maybe scones and biscuits but cake, not by a long shot. I've stuck with boxed cake mixes ever since I had an epic cake baking failure a couple of years ago. I was craving cake one night and it was too cold/dark/{insert lame excuse here}

The cake baking bug bit me again on Friday so I asked Chief (the bf) what kind of cake he would like me to bake. "From scratch?" he shot back with one eyebrow up. Nice vote of confidence there, dude. "Yes," I replied, "from scratch." He thought for a moment then said, "Pound cake." And pound cake it is.
I decided on a tangerine pound cake because I had picked up some lovely California mandarins the week before from an Asian grocery store. They were the tiniest mandarins I'd ever seen and were irresistibly cute. I had to buy them. Now they're going into my cake.
On Saturday, I woke up feeling confident about my tangerine pound cake. Armed with a supposedly well-rated recipe that I had found online, I started my pound cake adventure at around noon. Sadly, cake baking day was yet again a failure. Initially, it seemed like everything was going well, even after the cake was out of the oven but when it came time to release the cake from the pan, disaster hit.
My cake stuck to the pan like glue, even though I had greased and floured the pan well. Needless to say, it became a "topless" cake. When I finally cut into it, it hardly resembled the kind of pound cake I was used to...you know, the Sara Lee kind. It just looked like plain yellow cake. Oh the horror.
So back to the drawing board I went. On Sunday, I looked online for another recipe and found one by Jacques Pépin. Surprisingly, it differed quite abit from the other recipe in terms of the ingredient measurements. It also called for cake flour as opposed to all purpose flour. Curious to see how it would turn out, I gave it a shot. The verdict? I must say, this recipe is a winner. My cake came out...well, looking like actual pound cake for one and the flavor was excellent. The tangerine flavor was noticeable, yet subtle. I did err in over baking it however but remember now, I'm a novice. I'll just have to do better next time. ~ Veggie Girl
TANGERINE POUND CAKE
Adapted from Food & Wine
Ingredients:
2-1/2 sticks unsalted butter, softened
1-1/4 cups sugar
2 tbsp. tangerine zest
1 tsp. pure vanilla extract
1/4 tsp. salt
6 large eggs
1/4 cup milk, room temperature
1/4 cup tangerine juice
2-1/2 cups cake flour
Method:

Preheat your oven to 325° and prep your pan by greasing it and lining the bottom with a strip of parchment paper. The recipe called for a 10" x 5" pan but I used a 9" x 5" pan. It seemed to work for me.

With an electric mixer, beat the butter, sugar, vanilla, salt, and tangerine zest together on medium speed until fluffy. Then, add the eggs slowly, two at a time, until well mixed.
Beat in the milk slowly while mixing the batter well. Repeat the process with the tangerine juice. Next, sift the flour over the batter then fold in and whisk until well mixed.
Transfer the batter to the pan and bake for 1-1/2 hours, until it is cracked down the center, golden on top and if a toothpick inserted into the center comes out clean.


Cool the cake on a wire rack for at least least 10 minutes before unmolding. 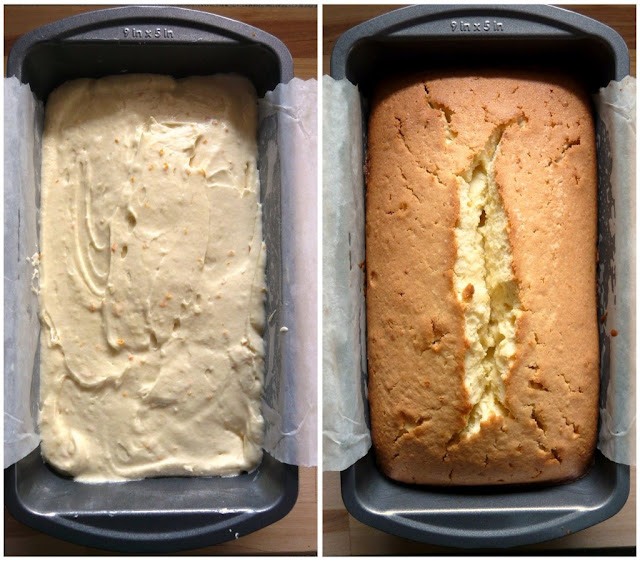 This recipe has been shared on Sweet As Sugar Cookies!

You make me want to run to the store and buy tangerines. That cake looks lovely. I have a sweet treat linky party and I'd like to invite you to stop by and link your cake up. http://sweet-as-sugar-cookies.blogspot.com/2011/04/sweets-for-saturday-15.html

Thank you for your comment. I'm linked! What a yummy looking page you have there.

That is really nice to hear. thank you for the update and good luck. bakery conway ar