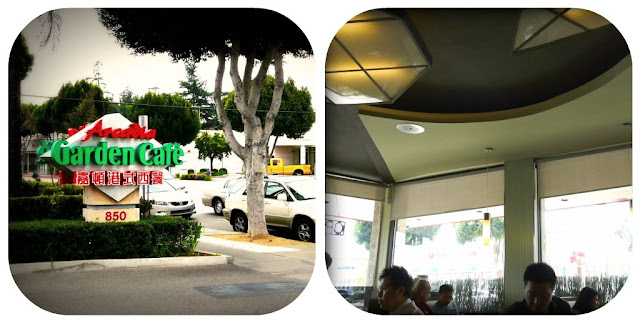 The kids and I met up with my cousin, Jetts for lunch and a movie today. She wanted to chow down at Garden Cafe in Arcadia so that's where we went.
THE REVIEW:
Garden Cafe is a Hong Kong style cafe with a wide array of both Eastern and Western dishes. The decor is simple and modern with booth and table seating as well as a bar area. We arrived at about 12:15 p.m. and were seated immediately since they weren't too busy. I was relieved for a couple of reasons. 1) I've been there before around dinnertime on a weekend and have had to wait (something I have no patience for these days!) 2) Their noise level is awful when it's a "full house". Something about that place makes the sounds of many boisterous patrons + bustling wait staff almost deafening for me. Today, it was actually quite peaceful -- not too dead and not too crowded.

The good thing about Garden Cafe is their huge menu. They've got something for every palate -- chicken, pork, steak, seafood, curries, sandwiches, pasta, salads, noodles (fried and in soup), rice, appetizers and the list goes on. I think they probably have over 50 items on their menu including their large drink menu which features different kinds of hot and cold teas, coffees, milkshakes and of course, soda.
The bad thing about Garden Cafe is that because of their huge menu, most items are either flat out lousy or just mediocre. Based on what you order each visit, it's either hit or miss. Yes, they suffer from "jack-of-all-trades-master-of-none" syndrome.
Their service is nothing to rave about but they win points in my book for being speedy in taking orders and serving the food. Other than that, they're not the kind to make small talk or come around to see if you need anything else.
The portions they serve up are nice and big and their prices are reasonable. If you order their surf and turf combos (filet mignon and fried shrimp for instance), you'll find that they're practically a steal at around $13 a plate compared to the $30 you would have to pay for it at Red Lobster.

GRUB WE ATE TODAY
Vegetable beef soup / Cream of corn soup
Garden Cafe serves free soup with every order, either their veggie beef soup or their cream of corn soup. Their veggie beef soup is one of my favorite soups ever. It's a thick tomato based soup with different veggies like cabbage, carrots and potatoes. Most of the time, the beef is MIA but I don't mind because the broth and veggies keep me happy. This is a must try in my book. Do it, it's free soup!
Ee-fu Noodles
I'll get to the point. Do not order this. A good ee-fu noodle dish has springy noodles braised in some flavorful sauce with tender shitake mushrooms and chives. This one was dry, lacking in ingredients and most of all, lacking in flavor.
Wonton Noodle Soup
If you're craving this dish, it might do the job. Not the worst wonton noodles I've ever had but not one of the best either. The broth and noodles are average, however, the wontons are its redeeming factor. They were large balls of shrimp and pork goodness and there were about five of these babies floating around in the soup.
Oriental Chicken Salad
Typical salad with romaine lettuce, pan fried chicken, mandarin oranges and crunchy noodles. It was accompanied by a sesame dressing that was a tad too sweet for my liking. I appreciated that it tasted fresh but it was nothing to rave about.
Crab meat and mushroom fried rice with XO sauce
This was probably my favorite dish today. I've had a few varieties of their fried rice and they've all been pretty good due to the strong wok hei flavor that's quite prominent in all of them. Today's fried rice was a little greasy but for the most part it was pretty darn good.
Overall, if you're looking for a quick bite to eat for little money and want a wide variety of food, this is your place. Expect to get your tummy filled but don't expect to have a mind-blowing culinary experience.